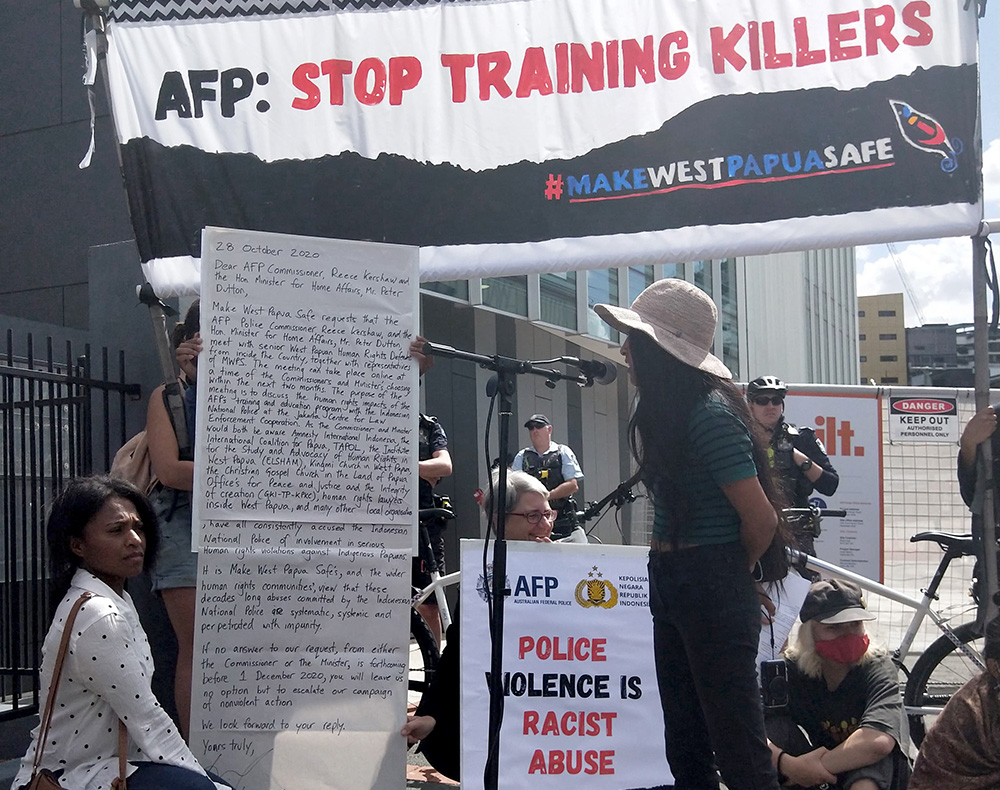 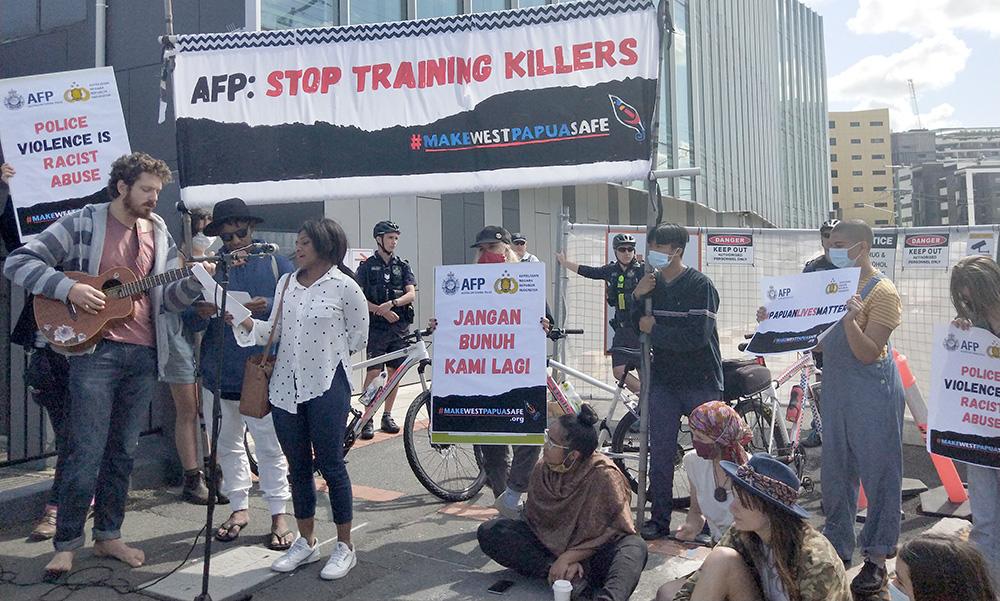 Campaigners from Make West Papua Safe publicly delivered the invitation letter to the AFP at their headquarters in Brisbane on 28 September 2020.

Water Cannons, tear gas and rubber bullets were fired into an unarmed crowd of Cenderwasih University students who had gathered to reject Jakarta's plans to renew Special Autonomy for West Papua.

Make West Papua Safe contacts inside West Papua sent MWPS urgent messages for help and videos and photos of the Indonesian police indiscriminately firing at Papuan civilians. One student, Matias Soo, sustained bullet wounds. Another student, Yakabus Guam, was taken to hospital after being beaten by police wielding wooden batons. Thirteen students were arrested by police. Fully armed Indonesian military personnel were also called in to back up the police.

The Australian government has made a substantial investment in specialist police training via the Jakarta Centre for Law Enforcement Cooperation. Over 20,000 Indonesian police, including the notorious Brimob and Special Detachment 88 (also known as D88), have been trained by the AFP since they opened JCLEC in 2004. Police from both Papua and Papua Barat provinces have been trained by the AFP.

Data from international Human Rights organisations like Amnesty International Indonesia, TAPOL, and the International Coalition for Papua, all shows that the Indonesian police are the leading perpetrators of human rights violations in West Papua. Crimes committed by Brimob and D88 in West Papua and across the archipelago include extrajudicial killings, arbitrary arrests and torture.

The lack of any human rights safeguards, or monitoring and evaluation of human rights impacts, begs the question: is the AFP using Australian taxpayer money to create more effective human rights abusers?

Make West Papua Safe has asked to see the “AFP National Guidelines on offshore situations involving potential torture or cruel, inhuman or degrading treatment or punishment”. Does training and support continue in such ‘offshore situations’?

A meeting between the AFP, Home Affairs and West Papuan representatives is a vital step towards accountability. Australian taxpayers and West Papuans deserve this chance to evaluate the impacts of Australian investments on human rights in our region.

Make West Papua Safe has asked for an explanation for the refusal of Home Affairs and the AFP to meet with human rights advocates from West Papua. 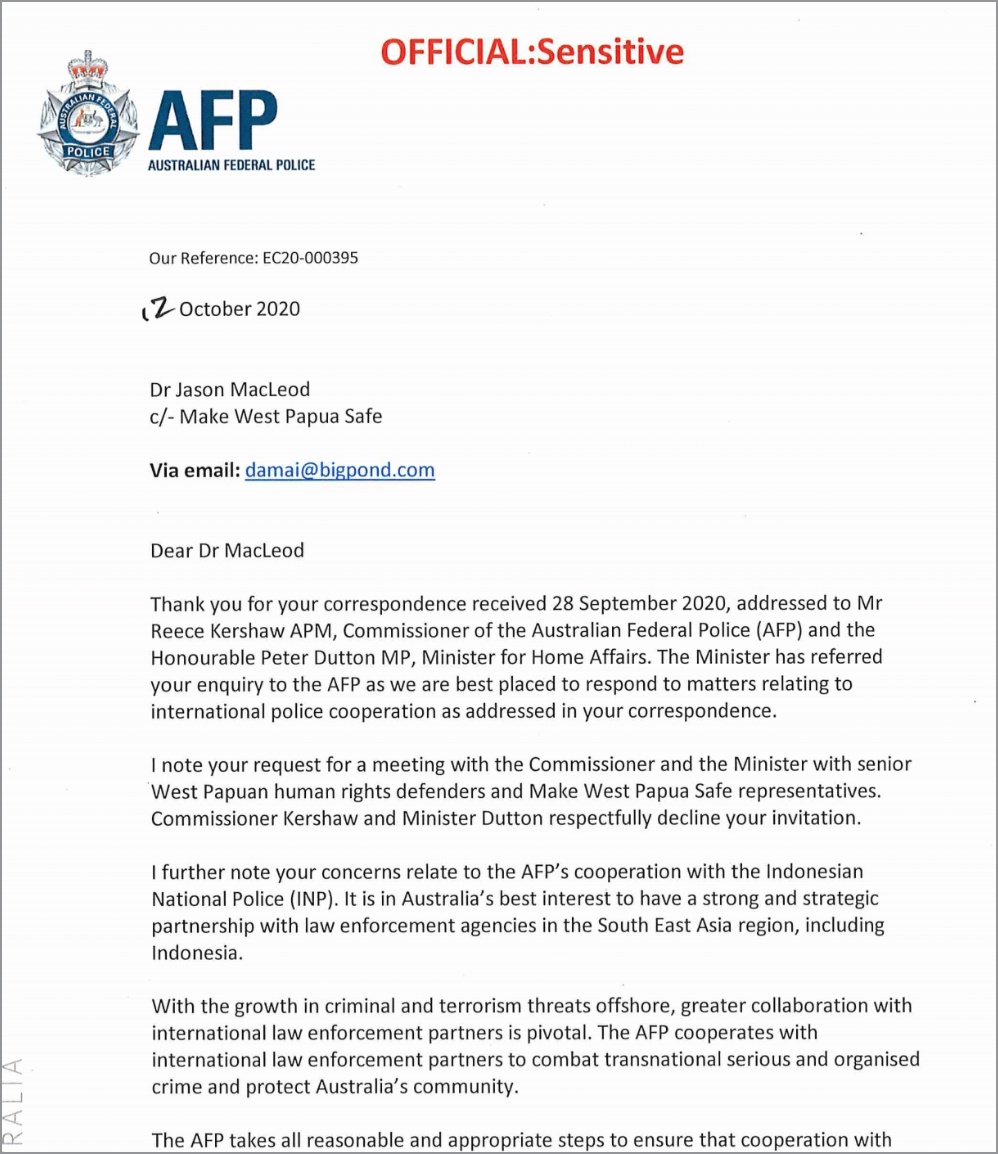